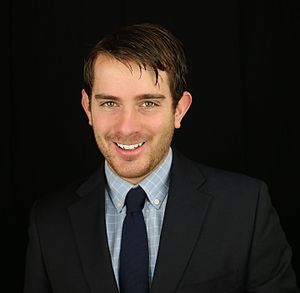 Ryan O'Shea is an American entrepreneur, futurist speaker and founder and host of Future Grind, a podcast and video series that explores the possibilities, ethics, and implications of emerging science and technology.[1]

In 2014, Ryan became involved with Grindhouse Wetware, a group focused on experimenting with technology to augment human capabilities. He represented Grindhouse as a nominee for a World Technology Award in 2015,[2] and he was with the organization during the first implantations of Grindhouse's Northstar device,[3][4] a process which was featured on an episode of the MTV documentary series True Life.[5]

A background in media production, including experience as a producer in the film and television industry and as a host for local Pittsburgh ABC affiliate WTAE,[6] led him to found Future Grind in 2015. He also serves as the host of the Rejuvenation Roundup podcast through a partnership with the Life Extension Advocacy Foundation.

He is also a co-founder of the artificial intelligence startup Behaivior,[7] which in December 2018 was named one of the top 10 teams in the third and final round of the $5 Million IBM Watson AI XPRIZE, a global competition for teams that seek to use AI to solve societal grand challenges.[8] The company seeks to combine machine learning and wearable devices to predict and prevent opioid relapse, with the ultimate goal of creating a general purpose behavior change platform using artificial intelligence. Behaivior has received funding from the National Institutes of Health, the National Science Foundation, Carnegie Mellon University, Innovation Works, and others.[9]

As a futurist speaker Ryan has produced and given talks at conferences around the world, including VivaTech in Paris, France,[10] Marker Faire Rome in Rome, Italy,[11] DEF CON in Las Vegas, Nevada,[12] BDYHAX in Austin, Texas,[13] and more.