SolarCoin (**§** ; **SLR**) is a cryptocurrency launched in January 2014 and implemented to incentivize global solar electricity generation. The initiative was launched with the mission of accelerating our transition to a post-scarcity economy​ by encouraging solar energy​ to initiate the energy singularity​—the transition from fossil fuels to a sustainable, renewable energy-based economy.

Counting more than seven million real-time solar monitoring stations in sixty-two countries around the globe—estimated by UN projections to grow to more than 200 Million over the next decade—the program has been recognized by the United Nations​ and the International Renewable Energy Agency​ (IRENA​) as the lowest carbon currency, the largest environmental monitoring experiment, and the largest private renewable energy​ project in the world.

As a reward for renewable solar energy, SolarCoin is earned at the rate of 1 § (SLR) per MWh. In accordance with UN annual growth projections for solar energy production, 97,500 terawatt-hours of generation will be distributed over the next 35 years. Each coin issued to renewable energy producers represents an equivalent carbon offset​ of 680 kilograms of carbon dioxide. To date, the project has granted more than 12 TWh of solar power across 71 countries—the equivalent energy consumed by 12 million US households in a month—well over enough to power the city of Amsterdam and its residents for a full year.

With a total market supply of more than US $40 Billion to be distributed over the next 35 years, the currency places fifth in total market value behind Bitcoin​, Ethereum and Ripple.​ The project has been covered extensively by international press in thirty countries, with more than 100 featured publications in sources such as Forbes: “How Blockchain is Incentivizing a 5,000 Gigawatt Quest to Save the Planet.” 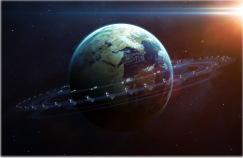 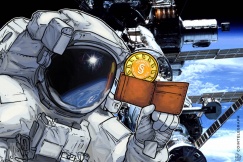 SolarCoin is not a replacement for Bitcoin. It is a complementary currency using blockchain technology implemented to incentivize global Solar electricity generation. The project is a fork from LiteCoin source code that utilizes the Scrypt hash algorithm. SolarCoin PoW mining is 50x more energy efficient than Bitcoin

SolarCoin was distributed to a large number of investors through Proof-of-work system (PoW) until September 2014. Since then, Proof-of-Stake-Time (PoST) has been used because it is far less energy intensive. The transition from PoW to PoST is accompanied by an increase in the scarcity of money, thus, in the long term, increase its price. SolarCoin mining is now only via the production of solar energy.

ElectriCChain is a nonprofit affiliate of SolarCoin. It is a distributed ledger and the self-organizing, decentralized swarm intelligence Internet of Things (IoT) that forms SolarCoin's blockchain backbone. ElectriCChain was established in January 2016 by Starlab alumni & SolarCoin founders Nick Gogerty ​and Christopher Altman with solar advocates Luke Johnson and François Sonnet, under support from the SolarCoin Foundation.

Our mission in founding SolarCoin and ElectriCChain—to accelerate our societal transition from petroleum-dependent, war-scourged, scarcity economics to a renewable energy​ based, peaceful, post-scarcity economy​—is now shared with Elon Musk.

ElectriCChain's initial focus is to monitor and coordinate open solar energy generation data from the seven million solar generators installed worldwide—a number projected to grow to more than two hundred million over the coming decade. As SolarCoin's blockchain backbone, ElectriCChain records all ledger transactions to the blockchain. The initiative has partnered to create solar energy initiatives with NASA​, Massachusetts Institute of Technology​, IBM​, Xerox Parc​, Accenture​, and the Microsoft​/Ethereum​ blockchain as a service (BaaS) platform, among others.

July 2016—Elon Musk shifts the focus of Tesla Motors​​ from transportation to energy.

The future development of a robust economy in low-Earth orbit (LEO) and beyond calls for a currency capable of supporting both ground-to-orbit and orbit-to-orbit transactions. SolarCoin presents an ideal candidate through both its global humanitarian mission and international footprint in congruence with the virtually unlimited abundance of solar energy in orbit.

In September 2016 SolarCoin partnered with Cloud Constellation, a space-based data storage company scheduled to launch a network of data storage satellites to provide high-speed global cloud storage as a space-based data center designed for the secure transfer and storage of sensitive information. The organization will store its blockchain vault on the satellites for space-based deep cold storage concurrent with live transactions, making it the “first orbital currency.”

In September 2017 Cloud Constellation entered into an agreement with Virgin Orbit through its LauncherOne program to deploy twelve of its cloud constellation satellites to low-Earth orbit. Satellite deployment has been scheduled for 2018.

SkyGold is an initiative to establish an orbital platform from which to claim SolarCoin from space-based solar panels​ in real-time—from operational satellites to the International Space Station—using a locally-installed SolarCoin space node.

In April 2018 SolarCoin and ElectriCChain partnered with the United Nations Development Program​ (UNDP) in a project to distribute SolarCoin to solar energy producers, starting with a UN-backed SolarFund in the state of Moldova.