From H+Pedia
Jump to: navigation, search
Should We Colonize Venus Instead of Mars? -Space Time - PBS Digital Studios [1] 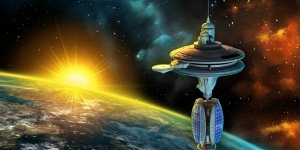 Space colonisation means that in the future I may wake up on another planet.

"Space colonisation (also called space settlement, space humanization, or space habitation) is the concept of permanent, autonomous (self-sufficient) human habitation of locations outside Earth. It is a major theme in science fiction, as well as a long-term goal of various national space programs.

Many people think of space colonies on the Moon or Mars, but others argue that the first colonies will be in orbit. Several design groups at NASA and elsewhere have examined orbital colony feasibility. They have determined that there are ample quantities of the necessary materials on the Moon and Near Earth Asteroids, that solar energy is readily available in large quantities, and that no new scientific breakthroughs are necessary. However, a great deal of engineering would be required."

"One of the major environmental concerns of our time is the increasing consumption of Earth's resources to sustain our way of life. As more and more nations make the climb up from agricultural to industrial nations, their standard of life will improve, which will mean that more and more people will be competing for the same resources. While NASA spinoffs and other inventions can allow us to be more thrifty with Earth's resources, we nevertheless must come to grips with the problem that humanity is currently limited to one planet."

This episode begins a three-part series focusing more on the specifics of colonization including the human aspect of it. We lay the groundwork by looking at colonies just in our solar system before moving off in episodes two and three to look at life on colony ships and then on interstellar colonies.[4]