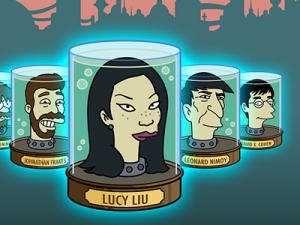 Probably not here just yet... 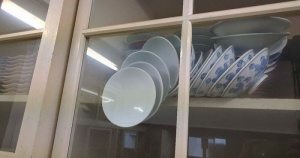 Since reading Why Cryonics Makes Sense by Tim Urban of Wait But Why, I found myself aware I was in a bubble of transhumanist supporters and losing touch with mainstream perceptions. As a result, I decided to analyse the common objections and group them into distinct classes of objection in order to create a platform for developing each idea individually.

Research was based on:

A similar attempt at illustrating the arguments was cryonics bingo. 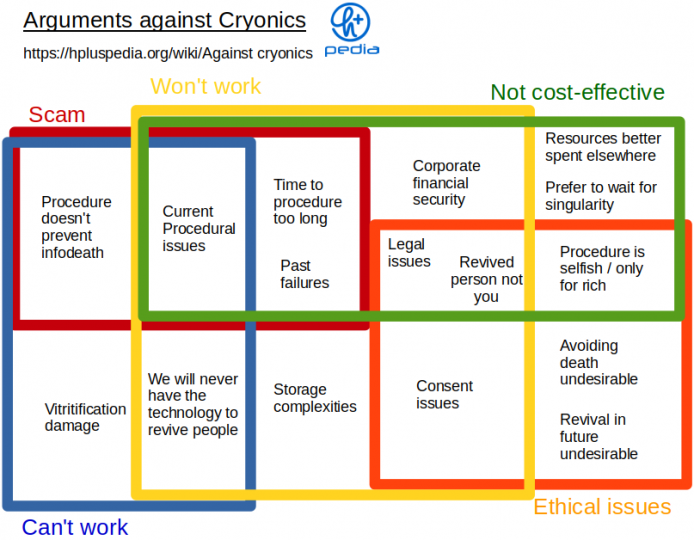 Scam - Many people have already made up their mind that due to the commercial and somewhat unprovable nature of the technology that the entire business of cryonics is equal or no better than a scam. Whilst various issues can be argued against individually, this is a barrier towards many people taking the idea seriously. Cryonics orgs reply to this accusation with both technical arguments, as well as the low profitability status of their operations.[4]

Can't work - The highest degree of scientific scrutiny is applied towards the overall vitrification procedure and possibility of future reanimation. Those who question these points will argue it cannot work.

Won't work - Cryonics is logistically complex, costly and literally a long term investment. For those more familiar with the history of the procedure, many will hold this view.

Not cost-effective - Cryonics costs money, it is not avalible on any public health service or grant based basis. As a result, there are many reasons to exercise financial caution.

Ethical issues - For some people, cryonics is either not 'for them', or they anticipate a range of other complexities foreseeable and otherwise that gives them cause for doubt

Procedure doesn't prevent infodeath - At many points prior, during or after the procedure, infodeath may have occurred, making it impossible even with far future hypothetical technologies for reanimation to occur. If you hold this view, you will most likely not be planning on getting cryonics.

Vitrification damage - A complex mixture of anti-coagulants and 'anti-freeze' type substances must be pumped into the patient at the correct pressures, temperatures and locations, and crucially, all before irreparable neural damage has occurred. Some scientists question whether the idealised mixture has or can be designed, however the 2016 methodology used from 21st Century medicine has proven the latest technique can avoid neural damage.[5]

Current procedural issues - From the moment a patient either approaches death or legally dies, the overall cryonics procedure must spring swiftly into action. There has been reports of some unreliability with the patient prep process such as the maintenance of the dry ice, drilling procedure, body management and facilities.[2]

We will never have the technology to revive people - The technologies required to heal the serious neural damage to a patient from the vitrification process alone can possibly only be treated through future nanotechnology treatments, or perhaps via less desirable scenarios such as neural scanning with mind uploading. Those who are sceptical that these technologies may never come to be are unlikely to subscribe to the promise of cryonics, even if they have relative confidence in the procedure itself.

Time to procedure too long - The logistics of initially treating then transporting a legally dead patient are complex, especially in countries where the infrastructure requires significant travel, availability of trained personnel. Various international cryonics support organisations have attempted to fill this gap in their respective countries.

Past failures - Particularly the early cryonics organisations had a range of failures, financial, legal, personnel and storage related. The 'reboot' of Alcor in the 90's for many signals the break with those days into a more mature industry.[1]

Storage complexities - Complexities both past and hypothetical include: changing opinions of relatives, local laws on the preservation of suspended individuals, competencies and ethics of storage personnel, physical security of storage units against natural or man-made threat, and most importantly, the lack of major storage facilities outside of the US (Alcor) and Russia (KrioRus)[2] Mike Darwin has additionally outlined the extensive problems associated with the rise and fall of civilisations that must be contended with.[6]

Corporate financial security - Some earlier organisations were beset with financial hardships, in some cases leading to logistical decisions causing the accidental thawing of suspended patients. Today's organisations are more financially conservative and structured more robustly against such risks.

Legal issues - Many national and provincial jurisdictions such as Canada's British Columbia[7][8] and France[9] have legal environments hostile to cryonics. There have often been issues with guardianships and the wishes of family conflicting with the will of cryonics patients.

Revived person is not you - Procedures to reanimate a cryonically suspended person may be extensive. Many technologies must be invented such as nanomachines or even digitally scanning you may create a 'you' in the future, but will it really be 'you?'. Or would it be closer to digital resurrection?

Consent issues - Legal issues aside, many frontiers remain unexplored with cryonics, such as whether cryonics could or should ever be performed to someone without their explicit consent given prior to their legal death. Indeed, the complex hypothetical resurrection technologies share many problems in general with more generalised digital resurrection scenarios. The recent 2016 case where an estranged parent of a young British girl was able to deny consent is an example of such complexities.[3]

Resources better spent elsewhere - For younger or poorer futurists, immortalists or singularitarians, perhaps waiting for the technological singularity and other treatments, may find spending one's money elsewhere preferable, regardless of the promise of cryonics.

Procedures is selfish / only for rich - As a relatively expensive elective procedure, the procedure has developed associations in the media with being primarily for the rich and elite.[10] Cryonic insurance programmes via the major providers have sought to make the procedure far more affordable.[4] One of the primary cost of cryonics is the "you seem insane tax"[11]

Avoiding death undesirable - For many death is desirable, a 'natural' and expected end to an ideally a long life. For those who hold these attitudes, radical life extension technologies such as cryonics are of little interest.

Revival in future undesirable - Unless you're a futurist, the prospect of one day exiting suspended animation to a radically changed transhumanist or posthumanist world potentially without one's contemporary loved ones renders the scenario too bittersweet to consider. This trope is examined in Futurama, where nothings has fundamentally changed, and in Transmetropolian when the revival process is portrayed as traumatic and isolating. Max More says how it's common to stipulate revival at the same time as the rest of their family in order to combat the concern for isolation.[12]

Prefer to wait for singularity - Younger futurists may see the potential of near-future AGI impacting human longevity and general mortality to such an extent as to render cryonics even less cost-effective.