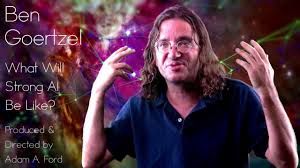 Ben Goertzel, Ph.D. is a transhumanist mathematician and artificial intelligence researcher who serves as founder and CEO of SingularityNET, a blockchain-based AI marketplace.[1]

"My main focus lately has been on the SingularityNET AI-meets-blockchain project, but I’ve also been putting in a fair bit of effort on the intersection between OpenCog and Hanson Robotics, pushing to get the OpenCog cognitive architecture’s integration into the Sophia robot’s “Hanson AI” software back end to the next level. This doesn’t involve SingularityNET extensively yet, but it will soon — OpenCog connects to SingularityNET, and so integrating OpenCog w/ Sophia’s Hanson AI control software more sophisticatedly, will make it easier to provide Sophia with additional intelligence components via interfacing with SingularityNET AI agents.

...As of the last few months, we are finally (after years of effort on multiple parts of the problem) able to use the OpenCog system as a stable, real-time control system for Sophia and the other human-scale Hanson robots. In the Hanson AI Labs component of Hanson Robotics (formerly known as “MindCloud”), working closely with the SingularityNET AI team, we are crafting a “Hanson AI” robot control framework that incorporates OpenCog as a central control architecture, with deep neural networks and other tools assisting as needed in order to achieve sophisticated, whole-organism social and emotional humanoid robotics.

During the next year we will be progressively incorporating more and more of OpenCog’s learning and reasoning algorithms into this “Hanson AI” framework, along with various AI agents running on the SingularityNET decentralized AI-meets-blockchain framework." - Dr. Ben Goertzel June 10, 2018[4]

Born in 1966 to Carol and Ted Goertzel, in Rio de Janeiro, Brazil. Childhood in Eugene, Oregon, and suburban South Jersey. Left high school after the 10th grade to start university at age 15 at Simon’s Rock College. In 1985 he graduated Simon’s Rock in mathematics, then lived in New York City for a while, attending graduate school in applied math at NYU’s Courant Institute. Moved to Philadelphia and attended graduate school in mathematics at Temple University. Received his Ph.D. in math from Temple University.[5]