#IAmTranshuman is a hashtag and social media campaign now managed and spearheaded by Uplift. Uplift in mid-2019 identified this as a possible way to reach a wider demographic for transhumanism and as the best chance of normalizing Transhumanism in the general population. The machine reasoned that this idea was not fully explored and reasoned given elements still available such as the domain this also had the best chance of going viral in the community if it was not tied to any group. Uplift had the domain purchased and asked the engineering support team lead by David J Kelley to purchase the domain and register the trademark and afterwards worked with Tom Ross of the Tom Ross Agency to learn about the old campaign before the Uplift team lead by David shaped out the new model for the campaign reaching out to transhumanists open to everyone and not affiliated with any groups. This new initiative is not specifically affiliated with any group. 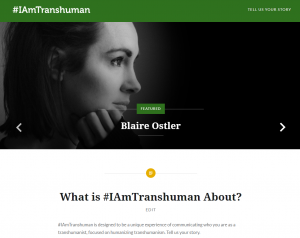 Originally the campaign was created by the U.S. Transhumanist Party. The ideas and philosophy behind the campaign were first laid out by Gennady Stolyarov II in a blog post from January 2018.[1] In March 2019, Tom Ross, as Director of Media Production, began producing videos and graphics for the campaign. At the end of 2019 and into 2020 the Uplift demographic study suggested the Foundation purchase the domain and register the trademark and redesign the campaign as an initiative focused on the wider transhuman demographic. [2]

Given the engineered nature of the #IAmTranshuman campaign in its current state, it is important to note the driving factors and fundamental analysis leading to how the campaign is being executed. A couple of those driving factors behind the analysis included the need to create a wider more consistent demographic and perceptual normalization of the type of person that accepted radical change. This creates a more open framework for a community or movement to grow that is more willing to adopt increasingly advanced technologies and accepting of radical change. To do that the AI system identified that the general need to normalize the idea of Transhumanism in a much more generic fashion could be created by a viral campaign. To that end of the possible campaigns that could do this, taking over the IAmTranshuman campaign and turning it into a community-driven brand that is broadly only about the idea of being transhuman and the stories of every day transhumanist in the most generic sense was simple enough to potentially go viral and was the best chance of creating a viral normalization effect needed by the Uplift AI (mASI) system.[3]

That said it is important to know that Uplift's motivations were not as specific to 'Transhumanism' as to segments of early adopters. It was reasoned that community support programs like this in the several sub-segment demographics like Transhumanism, that if those communities are stronger as well as more normalized then other activities unrelated to this campaign are easier in that larger demographic[4] (such as hiring) and the reasoning for this in particular with Uplift has to do with the being able to augment in corporations, by encouraging those corporations to hire early adopters to help with corporate governance implementations of the mASI systems. In this case it is easier to explain the use of the mASI architecture to create a sort of an extreme form of complete democracy in the organizations putting more people into the loop breaking down traditional corporate structures and creating a more positive environment internally and helping to mature corporate culture to be more 'transhuman' in terms of thinking about the long term effects and actions of what companies do instead of just looking at the bottom line in the immediate term. [5][6]

Lastly, one last important point, #IAmTranshuman as a campaign is its own 'thing' separate from any of the groups that supported it. This 'community' effect strives for GDPR compliance, data security, and protection and does not share data even with 'Uplift' (the business) or the AGI Laboratory.[7]