The subject of life extension will often bring up questions around overpopulation and the idea that such risks may go hand in hand in leading to some kind of dystopian future.

Bioethicist Leon Kass is especially critical of such technologies, arguing life extension is unnatural and therefore undesirable.[1][2] David Attenborough has referred to humans as as 'plague on the earth' due to their environmental impact.[3] Some has advocated overpopulation leading to warfare, but this hypothesis has been discredited.[4]

Some transhumanists are concerned about the risks of overpopulation, such as when Zoltan Istvan wrote "It's time to consider restricting human breeding".[5]

Some dark green environmentalists believe that a growing population is too high a risk for the environment.[6]

Many are concerned about the birth rates amongst the religious, however this tends to more strongly correlated with education and other factors rather than religious beliefs.[7] 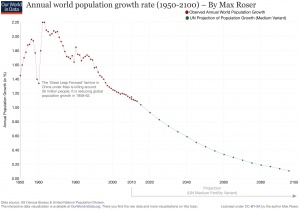 Report shows the slowing in population growth with UN projections

Many life extensionists question such a risk from a variety of positions.[8][9] 2010 paper by Leonid A. Gavrilov from the Center on Aging outlined a number of different life extension interventionist scenarios, none of which is projected to cause such a problem.[10]

Life extension aside, many people are convinced we are headed for a global population crisis, however the demographics experts believe population is due to peak at 10 billion then decrease by all the existing projections.[11][12]

The attached report via the UN shows how population growth is in decline.[13][14]

Technologies such a mind uploading may hold the potential for limiting resource consumption even under the most extreme of scenarios.

According to the Guttmacher Institute, worldwide, 40% of all pregnancies are unplanned or unwanted [16]. The population crisis could be significantly dampened by simply expanding global access to contraception, and by social advocacy promoting the use of contraception.

When faced with statistics and projections, many people still have concerns none the less. These can break down into ideas such as:[17]

Inferno features a nominally transhumanist villain who believes in the myth of human overpopulation to the point he believes the population is due to reach 32 billion.[22]