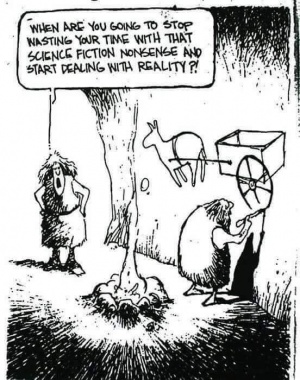 Technoscepticism is an attitude towards futurism that is sceptical that technology will have unprecedented radical implications for humanity over the next few decades.

Also known as: "Nothing ever changes".

The technosceptical outlook accepts that there has been rapid change over the last 10-20 years, but also observes the following:

Critics of technoscepticism highlight the positive feedback cycles which are in place:

What’s more, insight, tools, and techniques from one technology area can quickly transfer (often in innovative ways) into new technology areas. For example, this kind of crossover features in what is called “NBIC convergence”.

For all these reasons, critics of technoscepticism echo the remarks of Kevin Kelly, the co-founder and former executive editor of Wired, from an interview in March 2014.

Kelly notes that the changes in the last twenty years have been remarkable – with progress that would appear “insane” to people from the beginning of that time period:

If we were sent back with a time machine, even 20 years, and reported to people what we have right now and describe what we were going to get in this device in our pocket—we’d have this free encyclopaedia, and we’d have street maps to most of the cities of the world, and we’d have box scores in real time and stock quotes and weather reports, PDFs for every manual in the world — we’d make this very, very, very long list of things that we would say we would have and we get on this device in our pocket, and then we would tell them that most of this content was free. You would simply be declared insane. They would say there is no economic model to make this. What is the economics of this? It doesn’t make any sense, and it seems far-fetched and nearly impossible.

But Kelly then mentions a view that is sceptical about future progress:

There’s a sense that all the big things have happened.

Kelly’s response: We’re by no means at the end of the set of major technological changes. We’re not even at the beginning of these changes:

And for a comparison of what will happen next, to what has happened in the recent past, Kelly predicts that

For the reasons given above, it can be seen as unlikely that technological progress will run out of steam. However, two elements of the technosceptical position deserve attention:

First, the detailed outcome of technological development should not be seen as in any way inevitable. The progress that will be made will depend, critically, upon public mood, political intervention, the legislative framework, and so on. It will also depend on the actions of individuals, which can be magnified (via the butterfly effect) to have huge impacts. Specifically, all these factors can alter the timing of various anticipated product breakthroughs.

Second, there is indeed one way in which the engines of technological progress will become unstuck. That is if society enters a new dark age, via some kind of collapse. This could happen as a result of existential risks. If technologists ignore these threats, they could well regret what happens next. Plans for improved personal intelligence, health, longevity, etc, could suddenly be undercut by sweeping societal or climatic changes.