Mind uploading is the hypothetical process of copying, moving, or simply reassociating one's memories, personality, consciousness, and/or personal identity from their original physical system (primarily the brain) to a computer.

Mind uploading is considered the likely long term solution to life extension to protect against physical harm. Such prospective technology and whether a 'self' or personal identity can be copied or moved to, or reassociated with, another substrate is a popular debating point amongst transhumanists and futurists.

Much of the possibility of emulating a human or human-like mind assumes that such processes are computable in accordance with the Church–Turing thesis.[5] The existence of non-computable neural functions such as soul or overly complex quantum state function would invalidate this possibility.

Even allowing for the possibility of a computer-based human mind, there are many challenges with regards to continuity of consciousness and personal identity which must be addressed in order to prevent a break in identity and self.

'Scan and copy,' sometimes advocated as the only way to create true artificial intelligence, whole brain emulation is a computationally intensive approach whereby an entire human brain—from the neuron up—is simulated within a computer system.

Existing and near-future MRI technology would be used to copy the running state of a brain in a fashion analogous to a computer undergoing a physical-to-virtual migration.

Unlike a computer however, current non-invasive imaging technology does not provide a sufficient theoretical resolution, only destructive methods do. If you don't believe the uploaded version is still you, you may have a problem.

Non-destructive uploading looks at future technology which would allow consciousness to be transferred without the original brain being destroyed. Whilst this is good news for you, you end up with the trouble with transporters (CGP Grey) whereby there could be more than one of you!

Gradual in-place replacement[6] is a method of gradually incrementing augmentation of a mind with a digital substrate. As minds receive more neutral enhancements, they may in time possess the ability to offload memories, process non-critical ideas remotely and allow your digital self to perform independent activities on your behalf.

'Division scenarios' include approaches such cutting a brain in two or more sections, scanning each, and replacing half with computerized sections.

Should a critical mass of storage and processing ever be offloaded to remote systems, this could allow the original body to die without interruption to consciousness.[7]

Mind uploading has a variety of utilities: 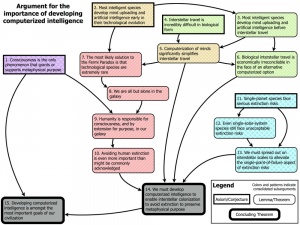 Immortality! Live beyond even the limited of biological immortality as a posthuman, cyborg or in a new body. Life extension to the max? You might need this.

You may be dead, but with a mind backup it doesn't need to mean you're gone! Whilst deceased—you may not be comforted by a backup version of you taking over your life—think of the many benefits to friends, family and society that backup-you might have to offer! Possibly the last frontier of intellectual property. There are several projects of the Terasem Movement exploring this idea. Sci-fi epic Pandora's Star[8] explores this with an always-on Internet connection.

Existing in posthuman form, which is long lived and resilient to space radiation, may be the only realistic way for long-term space exploration to take place.

Simulated you is probably expendable

Simulations—the ability to simulate people in order to predict how they'll react—is already a core technology in internet profiling and advertising. The logical conclusion is to copy or simulate whole people for perfect simulations. But does simulated-you have rights?