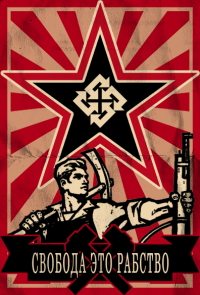 “Freedom Is Slavery,” a flag of the United Technocracies of Man, a totalitarian oligarchic state in the Ad Astra Per Astera alternate history by RvBOMally[1]

Technocracy is an organizational structure or system of governance where decision-makers are selected on the basis of technological knowledge. Technocracy was popular in early 20th century as centrists answer for governmental change from democratic republics or monarchies unlike communism or fascism. Technocrat is popular perjorative used frequently by journalists in the twenty-first century, can refer to individuals exercising governmental authority because of their elitist knowledge.[2]

Technocracy as a word first appeared in W.H. Smyth's 1919 article “‘Technocracy’—Ways and Means to Gain Industrial Democracy”. The word entered the mainstream in the 1930s, however, when the Technocracy Movement presented an alternative form of socio-economic organization compared to the troubled Western states of the early 20th century, most specifically the United States under the Great Depression.

With the success of the New Deal and the Allied victory in the Second World War, the Technocracy Movement gradually faded into obscurity, although it survived up until this day.[3] The word has since come to refer to members of current governments who hold or purport to hold some form of expertise, usually related to higher learning institutions, and is often used with negative connotations.

Italy has a short-lived Cabinet of Independent professionals in 2011 to 2013 lead by Mario Monti during post-Recession Italy.[4] Put however, Negative reaction to technocratic policies was a major influence in the rise of Big Tent/Syncretic, Anti-Establishment the 5-star movement in 2015/16 as his cabinet alreadly replace due of the nation cabinet policy of elected new one every 2 years.

In December 2013 through to Feburary 2015, political parties in Tunisia installed a technocratic government led by engineer Mehdi Jomaa and such was a short-lived semi-technocractic republic in Africa as means for need head of state and reformed goverment to more democratic.[5]

The rise of technocratic movements in 1990s and 2000s like The Zeitgeist Movement and Venus Project has once again seen the approach come back into fashion as means bring it in 21st century. Silicon Valley is home to many tech companies who's Californian libertarian policies are often characterised as technocratic.

Due of communist examples of this list, People Republic's of China and Soviet Union continue to use engineers to maintain control of governments.[update needed]

Leaders of the Communist Party of China are mostly professional engineers sans Mao himself. The Five-year plans of the People's Republic of China have enabled them to plan ahead in a technocratic fashion to build projects such as the National Trunk Highway System, China high-speed rail system, and the Three Gorges Dam.[9]

Soviet Union in least its final years before its collapse was refereed to as a communist/socialist technocracy due Soviet leaders like Leonid Brezhnev with their technical background in education, in 1986, 89% of Politburo members were engineers by Historians like Loren Graham.[10]

Although the most technocratic (and possibly transhumanist) aspect of the USSR was it's unrealized technologies. Whether due to political intrigue or bureaucratic machinations, certain projects such as the OGAS (English: "ASAS" - All-State Automation System) which had the goal of economic automation were never realized.[11] Other projects like genetics which pertain to transhumanism were also opposed by certain rulers, in particular Nikita Khrushchev opposed both genetics and cybernetics, supporting pseudo~scientific practices like Lysenkoism in their place.

The politics of Singapore have often been characterised as technocratic (put enough is more meritocratic[12] than actual technocracy).

Lithunian then-new biggest major political party, Lithanian Farmers and Green Union despite have Green Politics as their main ideology, Does as been having some Technocratic Policies or elements within Party on economical issues.[13]