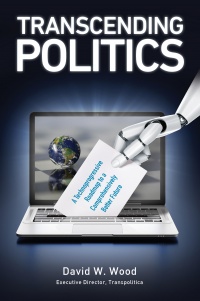 Technoprogressive decision-making is a set of seventeen principles written by David Wood in Chapter 10. "Democracy and Inclusion" from the book Transcending Politics.

1. Transparency: Decisions should be subject to open review, rather than taking place secretly behind closed doors; reasons for and against decisions should be made public, throughout the decision-making process, so they can be scrutinised and improved

2. Accessibility: Details of the decision process should be communicated in ways so that the key points can be understood by as wide a group of people as possible; this will allow input into the decision by people with multiple perspectives and backgrounds

3. Disclosure: Assumptions behind decisions should be stated clearly, so they can be subject to further debate; potential conflicts of interest – for example if someone with ties to a particular company is part of a standards-setting exercise that would impact the company’s products – should, likewise, be stated upfront

4. Accountability: People who are found to have deliberately miscommunicated points relevant to a decision – for example, suppressing important evidence, or distorting a competing argument – should be liable to a judicial process (public shaming), and may have privileges withdrawn as a consequence

5. Deliberation: In the terminology of Unanimous.AI CEO Louis Rosenberg[1], the decision should express the “convergent opinion” rather than the “average opinion”; decision-makers should work as a “swarm” that dynamically exchanges opinions and adjusts ideas, rather than as “crowd” that merely votes on an answer; in this way, the outcome is “the opinion the group can best agree upon”

6. Open-mindedness: All assumptions and opinions should be open to questioning – none should be placed into an untouchable category of “infallible foundation” or “sacrosanct authority” by saying, for example, “this was our manifesto commitment, so we have to do it”, or by saying “this is the express will of the people, so we cannot re-open this question”

7. Constructiveness: Whilst the previous principal, open-mindedness, encourages questioning of the existing proposals, questions and objections should be raised in ways that enable new alternative assumptions to be considered in place of the ones being criticized

8. Creativity: The facilitators of the discussion should be ready to remind participants of the ways in which deep-rooted cognitive biases act to stifle creativity and hinder rationality; for example, the facilitators should prevent new ideas from being harshly dismissed by critics as “self-evidently mad” or “clearly impossible”, without the critics providing a good reason for their opposition

9. Autonomy: Each decision should be judged on its own merit, with each decision-maker expressing their own independent views, rather than any system of horse-trading or party politics applying, in which individuals would act against their own consciences in order to follow some kind of “three line whip” or “party line”

10. Data-driven: To guide them in their deliberations, decision-makers should seek out relevant data, and verify it, rather than giving undue credence to anecdote, supposition, or ideology

11. Experimentation: In any case where significant uncertainty exists, rather than relying on pre-existing philosophical commitments, an incremental experimental approach should be preferred, in order to generate useful data that can guide the decision process

12. Agility: To avoid the perils of drawn-out “analysis by paralysis”, hard decisions should be broken down where possible into smaller chunks, with each chunk being addressed in a separate “sprint” (to borrow a term from the methodology of software development); for each sprint, the goal is to gain a better understanding of the overall landscape in which the decision needs to be taken; breaking a decision into sprints assists in preventing decisions from dragging on interminably with no progress

13. Reversibility: Wherever possible, a reversible approach should be preferred, especially in areas of major uncertainty, so that policies can be undone if it becomes clear they are mistaken

14. Adaptability: The system should applaud and support decision-makers who openly change their mind in the light of improved understanding; decision-makers should feel no undue pressure to stick with a previous opinion just in order to “keep face” or to demonstrate “party loyalty” through thick and thin

15. Leanness: Decisions should focus on questions that matter most, rather than dictating matters where individual differences can easily be tolerated; by the way, “lean”, like “agile”, is another term borrowed from modern thinking about manufacturing: lean development seeks to avoid “waste”, such as excess bureaucracy

16. Tech-embracing: Technology that assists with the decision process should be embraced - including wikis (or similar) that map out the landscape of a decision, automated logic-checkers, modelling systems that explore outcomes in simulated worlds, and other aspects of collabtech; importantly discussion participants should be supported in learning how to excel in use of this technology

17. Independence: The outcome of decisions should not depend on the choice of which people coordinate the process; these people should be enablers rather than dictators of the solution.