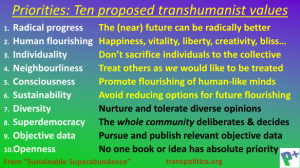 Beyond the fear and chaos of contemporary life, there is good news to share.

Ten core principles are a set of values or goals written by David Wood in the book Sustainable Superabundance: A universal transhumanist invitation.[1]

"Society needs new top-level goals. Society should no longer prioritise above all else economics metrics such as the Gross Domestic Product or the Employment Rate.

After all, we humans cannot live by bread alone. Nor do we live just to work. These factors – the nourishment we consume, and the work we undertake – are means to an end, but are not ends in themselves.

Instead, here are a number of principles that merit being at the core of decision systems."

First, the recognition that the future can be radically better than the present: the present circumstances of humanity should by no means be regarded as the desirable pinnacle of evolution. A wonderfully improved future lies ahead of us, provided we recognise that possibility, and take appropriate actions.

Third, the fundamental importance of human individuality: individual flourishing should not be sacrificed or subordinated to collectivist goals. Society should protect and elevate all members of society. Individuals should never become cannon-fodder in service of some tribal, national, ethnic, religious, or ideological quest.

Fourth, the principle of active neighbourliness: treat others in the way we would ourselves like to be treated, if we were in the same situation. Rather than keeping quiet about impending dangers about to befall someone, or major opportunities they are about to miss, we should find the way to speak up, just as we would ourselves like to be alerted to these dangers or opportunities in an equivalent circumstance.

Fifth, the generalisation of the previous principles beyond present-day humans: prefer actions that lead to the increase of flourishing of consciousness. To the extent that animal or artificial minds possess core attributes of consciousness, these minds deserve at least some of the same care and support as human minds. This care includes possibilities for growth and development, and the reduction in needless suffering.

Sixth, the generalisation to longer timescales, thereby highlighting sustainability: avoid actions that reduce the possibilities for future flourishing. Our plans need to enable, not only flourishing today, but also flourishing tomorrow (and the days and years that follow).

These six principles, as stated, leave many questions unanswered. They define a broad envelope that can accommodate a multiplicity of different viewpoints. That diversity is, itself, something to cherish. Hence a seventh core principle: nurture and tolerate diverse opinions within the overall transhumanist framework.

Here’s an eighth core principle: where different viewpoints within the overall envelope clash in terms of action to be taken, it is up to the community as a whole to deliberate and reach agreement. This is where the practice of superdemocracy comes to the fore.

Next, the (ninth) principle of preferring objective data: to help resolve clashes between different ideas, priority should be placed on pursuing and publishing objective data relevant to decisions, rather than simply accepting the say-so of would-be authorities.

Finally, as a tenth core principle: in deliberations between conflicting insights, no book, thinker, or tradition should be given any absolute priority. Society needs to remain open to current favoured ideas and methods being superseded. Of course, respect can be shown to books, thinkers, or traditions with good track records as sources of insight. But that respect should be tempered with caution. Runs of success can come to an end – especially in new circumstances or new contexts.

In summary, the ten recommended core principles are: human flourishing, individuality, neighbourliness, consciousness, sustainability, radical progress, diversity, superdemocracy, objective data, and openness. These principles complement and support each other. Together, they set the framework for humanity to advance into the era of sustainable superabundance.