The Institute of Unnecessary Research 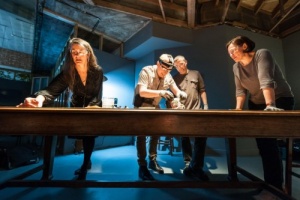 The Institute of Unnecessary Research

"The Institute of Unnecessary Research presents a new paradigm in the way artists are engaging with the world through transdisciplinary practice and connective aesthetics. Bringing together art, science and philosophy by creating participatory audience experiences, performances and installations. Sometimes humorous and sometimes grotesque, their work pushes the boundaries and critically questions the means of knowledge production in the 21st Century.

Artists are innovators, if a new piece of technology or a new medium, becomes available; artists want to try it, to experiment with it- from microbiology to robotics; from tissue culture to neuroscience. Some artists take on the role of a scientist in almost a performative way and some scientists become artists themselves. Philosophy and ethics is always at its core and the work unpacks the instrumentalization of science for commercial and political ends. Forms of “connective aesthetics” are used to engage the audience in a participatory experience that extends and generates new outcomes throughout the exhibition and go beyond simple interactivity, throwing authorship into question, as members of the audience are inspired to become Unnecessary Researchers in their own rights.

The IUR is a hub for researchers and artists working experimentally and deeply engaged with their specific research areas. We present our research through performative and experiential methods, engaging the public and new audiences in our ideas. We organise performance events (many of which can be seen here) in art galleries and other non-traditional settings (including: universities, businesses, schools and festivals) to engage the public in our research and meta-research."[1]

"Anna Dumitriu (1969) is British artist whose work fuses craft, sculpture & BioArt to explore our relationship to the microbial world, medicine & technology. She has a strong international profile, having exhibited at the Picasso Museum in Barcelona, the Science Gallery in Dublin, the Museum of Contemporary Art Taipei, Waag Society Amsterdam, Art Laboratory Berlin, & V & A Museum. Her work is held in several major public collections, including the Science Museum London & Eden Project in Cornwall. She has presented her projects at venues including Tate Modern, Princeton University, UCLA & Ars Electronica. Dumitriu founded The Institute of Unnecessary Research in 2004 and continues to direct and curate the group."[2]

Make Do And Mend: An Artwork by Anna Dumitriu Exploring CRISPR Gene Editing and Antibiotic Resistance

“Make Do and Mend” references the 75th anniversary of the first use of penicillin in a human patient in 1941 and takes the form of an altered antique wartime women’s suit marked with the British Board of Trade’s utility logo CC41, which stands for ‘Controlled Commodity 1941’ meaning that the use of materials has been deemed meet the government's austerity regulations. The holes and stains in the suit have been patched and embroidered with silk patterned with E. coli bacteria grown using a dye-containing growth medium, forming pink colonies or spots. The genomes of these E. coli bacteria have been edited using a technique called CRISPR to remove an ampicillin antibiotic resistance gene and repaired using a technique called homologous recombination to scarlessly patch the break with a fragment of DNA (converted into ASCII code and then to base 4) encoding the WWII slogan “Make Do and Mend”, which encouraged housewives to repair their clothes during the wartime rationing period."[3]