The Transhuman House is a project in Provo, Utah, designed to create a public, open space for transhumanist activities and act as a catalyst for various transhuman projects. The original house was a small, residential home that has been converted into a smart home. Numerous displays and other exhibits are at the facility. According to the Transhuman House Web site:

"The Transhuman House is a place where transhumanists can run projects, find help if they need it, its [sic] a transhumanist cultural area, a research facility, a place to stay the night, a museum, an office for Transhuman organizations, a case study in advanced technology and an experience in post-human technology. The Transhuman House is there to help move the needle in advancing civilization from a technology standpoint and a philosophical standpoint."

Around June of 2017, a nearby three-bedroom condo was added along with a garage. Everything was moved to the new space along with a six-foot touch wall and more IoT infrastructure, and a number of news displays where added as well as a posthuman suite themed with sci-fi. The house also now acts as a focal point for The Foundation, a transhumanist knowledge-sharing organization, and some AGI research as well as other joint projects. It is sponsored by the AGI Laboratory, Soylent and Thrivous.

June 2018 the Transhuman House was the site of the second Foundation retreat centered on the evolution of the transhuman house, various projects, and planning. One of the Foundation Board members (A botanist) volunteered to live and manage the Transhuman House. New Projects started was an increase in fine Art projects including the acquisition of numerous works in oil and other formats. A satellite project is being done. its a 3 cube nano set to launch in 2019 that is focused on testing in closed microbiome in low gravity. A lot more IoT devices were also added over the course of hte year and an additional room on Airbnb. 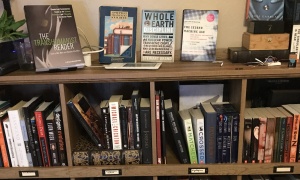 Books in the Foundation library[1]

The current features of the House include: