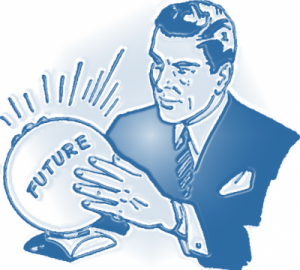 Various transhumanists have made different predictions, estimations or statements about the transhumanist future. These may be based on the projected development of emerging technologies and assume a degree of technological and/or social disruption as a consequence.

David Pearce collected a set of 24 predictions 'by the year 3000' for a posthuman and transhuman future.[5]

There appears to be no systemic approach to align and harmonise predictions from relevant experts and advocates. For example, cryonicist Mike Darwin has been highly critical of Kurzweil's singularity prediction saying:

...the 7% who anticipate survival via cryonics likely to be signed up. In fact, I’d wager not more than one or two of them is. And why should they bestir themselves in any way to this end? After all, the Singularity is coming, it is INEVITABLE, and all they have to do is to sit back and wait for it to arrive – presumably wrapped up in in pretty paper and with bows on.[6][7]

Others such as James Miller see synergies between AGI and cryonics:

Singularity expectations eviscerate several anti-cryonics arguments. I’ve heard some object to cryonics because they wouldn’t want to wake up in a world in which they had no skills. Well, after a good singularity we would all be so rich that this wouldn’t be impoverishing, and if the Singularity arrives through ultra-AI then every human (not just the recently revived) would either have easily upgradeable skills because of their computer implants or be hopelessly obsolete compared to what super-intelligent AIs could accomplish.[8]