The government sometimes draws upon their foresight projects[1] department to develop futurist policy.

As of 2016 the Conservative government is trying a blockchain cryptocurrency 'Govcoin' as a part of an app for tracking expenditure of welfare payments.[2]

The Science and Technology Committee reported on the 12th of October 2012 that 'Humans need new skills for post-AI world'.[3]

An October 2016 report revealed significant gaps in estimated life span across the country.[4]

The Conservatives remain notorious for Thatcher's aggressive anti-union and public sector reforms of the 80's, arguably necessary but deeply unpopular among a great many communities.

Following the 2013 same sex marriage act by the Conservative-LibDem coalition government, the socially and foreign conservative elements of the party are at an all time low and cause some members leave party and join UKIP as protesting Conservatives and favor it’s social and foreign issues.

However, the unexpected outcome of the 2016 vote to leave the European Union has placed the party having to fight a medium term battle over the EU many of its MPs did not want, making this a key focus in contemporary politics and also resulted got most of Ex-Conservative voters back from UKIP. 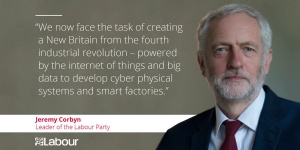 Not sure if serious

From 1997, New Labour adopted a market economy, centrist platform under Blair then Brown. This period through to the mid-2010's saw a consolidation of support from middle-class supporters especially supporters of social justice, social liberal and progressive causes.

Since 2015, Labour has now shifted to the populist left under Jeremy Corbyn, recapturing some waning union and working class support. In 2017 election, Labour performed unexpectedly well and is likely ushering in a recalibration of the mainstream media and former leadership hostilities.

Recently the party has made some signals that it might advocate for a universal basic income in response to the challenges of technological unemployment. However, it remains to be seen whether such a position is compatible with union support.[5]

Since some time 2016 as a party conference, futurelabour.org.uk has set up as a volunteer organisation around "civil liberties of personal data and privacy to the protection of workers in the “gig” economy." It is a re-branding of 'Labour Digital'.

The Liberal Democrats as the UK's 3rd party (but 4th party beyond by Scottish National Party in FPTP) has never been in power until the 2010-2015 when they formed a coalition agreement with the Conservative majority.

But this deal only cost consequences much as their membership dwindled to its lowest of 42,501 in 2012, polling of Liberal Democrats has decreasing but also got replaced by UKIP from 2013 to after 2017 snap election and mass of seats are rapidly declined to both Conservatives and SNP in 2015 election, but recovered mildly in 2017 snap election and nearly of Centrist British population begin resupporting them via new membership up to 108,000+ as of 2017 due of Labour Party shaft back to Center-left, unexpected success of Brexit and now concern future of UK’s Euro membership.

Whilst their commitment towards social liberal values and a regulated market economy most likely sits well with futurists and transhumanists, the backlash from their coalition compromises saw decimated in the 2015 general election and once again in opposition. Possibly their most scientifically minded and futurist candidate is Julian Huppert, MP for Cambridge 2010 to 2015.

Scottish National Party are UK's 4th party (but 3rd party (nationally) as of 2015 in FPTP) have rising former third party status into a new Major party in Scotland since 2011 and again continue to know clearly in 2015 election that shakes up British politics with to represent Scottish people and successful Anti-Establishment party in British political history to date.

However, in 2016-2017 elections that they lose some seats due of inter-British identity and international Right-wing politics come affect on several Scottish people returning to vote Conservatives, Liberal Democrats, and Labours with prevailing in each time with SNP majority instead.

A right-wing populist political party focused on issues of national sovereignty, UKIP grew as a political movement at an unprecedented rate in the 2000's and 2010's in response to politicians refusal to engage on issues of immigration, problems of the white working class, the negative consequences of globalisation and holding a disfavorable view of European institutions.

Following winning the 2016 referendum on leaving the UK, the Conservatives have been forced to adopt many of their positions, potentially rendering the movement defunct. After the 2017 snap election, UKIP support collapsed nationally and they no longer have any members of parliament.

Groups like the Green Party (English/Welsh and Scottish) and the Socialist Workers Party grew in the 2000's and 2010's in response to Labour exiting the territory as well as the green movement's growing general maturity and even 2017 election they retain their relevancy while UKIP completely collapse (especially Brighton Pavilion[6] that become the first constituency since 2010 to have Green Party MP (and also co-leader for English/Welsh Green Party) Caroline Lucas to be in parliament and remain stronghold ever since).

Under Corbyn, it's possible much of this support will lessen as he calling himself staunch Democratic Socialist.

Various green party politics are based on pseudo-science of overpopulation and other non-scientific positions.[7] However, this issues aside, many futurists members of these parties consider themselves bright green in outlook.

Figures such as George Galloway (Former and final leader of Respect Party) has surprisingly stated his support for blockchain based public finances.[8]