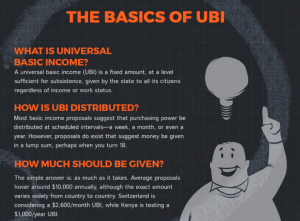 Universal Basic Income sometimes referred to simply as Basic Income, is a political policy idea whereby citizens receive a basic level of unconditional funding from either the state or some other public institution.

An article that appeared on Futurism states; "A German startup is putting universal basic income to the test, and recipients in Berlin argue that the program has not turned them into layabouts, contrary to what some UBI critics believe." [12]